Robbie Countryman
Back to School is the twenty-fourth episode of Season 3 of The Thundermans and the sixth-ninth overall. It premiered on August 13, 2016 to 1.66 million viewers.

Phoebe and Max return to their elementary school to complete a hero assessment exam and discover that the instructor is a former classmate that Max tormented, while the rest of the family competes in an election.

Phoebe and Chloe are in the Thundermans living room when the Thunder Monitor announces an incoming transmission from Super President Kickbutt from the Hero League. Kickbutt tells Phoebe that it seems that she missed her superhero assessment test when she was in the 5th grade at Secret Academy of Superpower Studies, (SASS). Phoebe says that is impossible because she never missed a day of school. But Max walks in to remind Phoebe of a "surprise" three-day weekend they had in 5th grade back in Metroburg when they closed school on Friday for locker-waxing. As Phoebe says it out loud, she realizes that it wasn't a real thing. Max admits that he hacked into the school system to send Phoebe an email saying there was no school just to ruin her perfect attendance record.

Kickbutt suspends Phoebe from Hero duties until she goes back to the fifth grade and passes that test. Max starts making fun of Phoebe but his joy is cut short when Kickbutt forces him to do the test too... or else he would be thrown into the Hero League Junior Jail for hacking into school computers.

The Thunder Twins travel to SASS for their test. At the entrance to the school, Max brags to Phoebe about how the Max legend was born in SASS and how everyone knows him. He sees one of the students and asks her if she's heard of "Max Thunderman" but she says she's only heard of Phoebe. She asks Phoebe if Max is Phoebe's sidekick but Max scares the little girl away. Max then shows Phoebe where he pranked a kid called "Metalbutt" by magnetizing a wall to get Metalbutt stuck on the wall. Phoebe says what Max did was mean but Max says it was great. A UFO-looking robotic Hall Monitor confronts Phoebe and Max for not wearing school uniforms. It then dresses them up, giving Max a girl's dress.

Max and Phoebe walk into the classroom to take the test. They find Mr. Silver Eagle who also shows them the other kids who missed their tests as well and asks them to introduce themselves and show their powers:

The kids and their powers:

When Phoebe and Max take their seats, Keely reveals to Phoebe that she has a crush on Chester but Chester likes Jocelyn. Silver Eagle introduces Leonard, as his assistant to carry out the test. Max tells Phoebe that Leonard looks familiar. Silver Eagle explains that the test will be taken in 3 parts.

For part 1 of the test, the students must quickly come up with a weapon using the items on the table to stop the robot before it zaps them. Jocelyn and Keely go first as Max brags to Phoebe about how easy he's realized fifth grade was. He says they'll be out of there soon, just before Leonard comes over and says "Not so fast!" followed by the classic, "Remember me?" Leonard then hits his butt to reveal that he is Metalbutt - the same Metalbutt that Max stuck on the wall. Max asks him why he is still angry. Metalbutt reminds Max of all the names he used to call him like "Tin Tush" and "Rust Rump" then he says "because that's what you use to call me". Leonard swears revenge on both Max and Phoebe. Phoebe is being punished for refusing to write something in Leonard's yearbook. At that moment Mr. Sliver Eagle says "20 seconds girls" and the robot tries to laser them but they fire their invention causing it to be disabled, then everyone claps at them. Even, Metalbutt.

Leonard tells the Thunder Twins that he knows if they don't pass the test, Phoebe won't be a superhero anymore and Max would go to jail. He says that he is going to make sure they fail the test. Max tells Leonard that there's nothing he can do because the other guy is in charge. But then Leonard knocks Chester with his metal-butt, forcing Chester's spikes to hit Mr. Silver Eagle's butt. Silver Eagle goes for treatment, leaving Leonard in charge. Phoebe and Max panic.

Phoebe tries to call President Kickbutt to tell them about how the creepy Metalbutt wants to fail them but Leonard sits on Phoebe's phone and crashes it with his butt. Leonard then gives Max and Phoebe items that can't possibly be turned into a weapon to destroy the robot. They have a mop, roller skates, a clock radio and some hay. Yet, Keely and Jocelyn were given actual weapons. Phoebe tries to beat the robot with the mop but the robot's lasers are too strong for her. Max comes up with a better idea. He makes a "girl robot" by putting the mop in the roller skate and placing the clock-radio on its face. Phoebe mocks his brother for finally making himself a date to the super dance. The evil robot starts to shoot lasers but when it sees the girl robot, it moves closer to her. Max had rewired the clock alarm to a high-frequency that the evil robot can't stand. The robot melts, giving the Thunder Twins a pass for part 1 of the exam. Leonard gets upset.

Part 2 of the test: Chester and Rodney go first. Chester dedicates his performance to Jocelyn but Jocelyn says she doesn't care and she doesn't like him, and she makes a movement with her hands telling him to "go away" and he leaves upset that she doesn´t want anything with him. And probably that she will not want to go with him to the super dance. Keely shows Phoebe how sad it is that Chester doesn't even know she exists, yet he's chasing after Jocelyn who doesn't even care about him. Phoebe tries to advise Keely but Keely says that she'd prefer getting advice from a teenager who isn't repeating fifth grade. Phoebe tells her to not worry about getting noticed. She is smart, she can control the weather and if Chester is smart enough, he will notice her. After Chester and Rodney are done with their part 2 of the test, Phoebe and Max go to do theirs but Leonard puts them in straight jackets so that they can't do anything. They fail that part of the test.

Max and Phoebe have to pass part 3 of the test or else Phoebe won't be a superhero anymore and Max goes to junior jail. The challenge is to cross the room, save the dummy and get back while dodging lethal lasers. Leonard says Max and Phoebe should go first. Keely tells Leonard that Mr. Silver Eagle says the students should always wear protective gear when dealing with lethal lasers but Leonard refuses to listen and forces the Thunder Twins to get started. Max and Phoebe get on the floor ready to save the dummy but Leonard cranks up the lasers to the extreme increasing the intensity of the lasers. The twins struggle to get to the dummy, despite their epic cartwheel skills.

Jocelyn and Keely realize that it's getting too dangerous for Phoebe and Max. So, they decide to help. Jocelyn tries to take out the lasers using the blaster they made to take out the robot in the first test. However, the blast magnetizes the logo, causing Leonard to be stuck on the logo by his butt. Max finds it hilarious but Phoebe notices that Leonard is in danger of the lasers attacking close to him. Phoebe tells Max to leave the dummy and go save Leonard. Max is not thrilled about saving Leonard who wants them to fail the test. Max and Phoebe then agree to save Leonard, even if it means failing the test.

Leonard refuses to accept Phoebe and Max's help thinking that they want to trick him. Max apologizes for calling him names and pranking him and says that he did all that because he was a jerk trying to make a name for himself. Leonard lets Phoebe and Max save him. Since the lasers and the magnetism are too strong, Phoebe asks Keely to use her weather power to put a rain cover over Leonard, then hit the logo with a lightning bolt in order to create a charged cloud and neutralize the magnetism. Keely is worried she might hit Leonard but Phoebe gives her confidence saying that she believes in her.

Silver Eagle returns at the end of the test and scares Phoebe and Max, saying that they have failed the test because they couldn't save the dummy. He later says that he was kidding and that Max and Phoebe's rescue was amazeballs and says that they have passed the test. And Leonard gets his karma when Mr. Silver Eagle reveals that he knows Leonard was behind it, so, he demotes Leonard to the 3rd graders. Chester and Keely have a moment with Chester admitting that Keely was awesome. Keely thanks Phoebe for believing in her.

Hank calls for a Thundermans family meeting to share weekly chores and he assigns Nora to weed the garden. Nora complains about it because she's been assigned the hardest task for the fourth time in a row. But Hank refuses to listen to her because he is the President of Important Stuff.

Nora gets mad at her dad and says that no one elected him as the president. Barb stands up for Hank saying that's not how they do it in their house. But Nora says since the country holds elections, the Thundermans should hold elections too. She nominates herself to run for president. Hank and Barb are scared because if Nora wins, she would control everything. Hank says he won't allow an election but when Nora mocks him for being afraid of losing to her, he caves in. He asks for an election.

When election time comes, Dr. Colosso makes himself the moderator of the debate. When he asks Hank why people should vote for him as President of Important Stuff, Hank and Barb bribe everyone with chocolate. When asked the same question, Nora says that she would give out chores fairly. Hank interrupts Nora's speech by bringing a carnival into the house.

Voting begins. Barb is worried that they might lose to Nora. Hank is confident that Billy and Chloe will vote for him because he's given them chocolate. But then both Billy and Chloe start asking how to spell Nora. Hank realizes that he's losing to Nora. He goes to her and apologizes for not listening. When Barb starts counting the votes, she realizes that both Billy and Chloe have voted for Nora, meaning that Nora will win after voting for herself. But Nora's vote turns out to be for Hank. She says she voted for her dad because he admitted he was wrong and he was willing to listen. She didn't want to be president. She just wanted a president who listens. 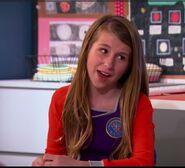 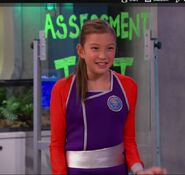 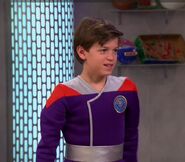 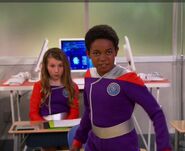 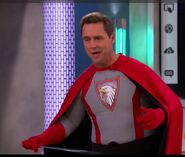 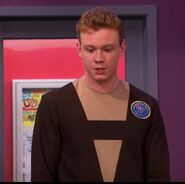 Want to check out more Back to School pictures? Visit the gallery now!

Back to School Gallery
Community content is available under CC-BY-SA unless otherwise noted.
Advertisement