Chester is a character on the Thundermans. He is a young superhero student at SASS. Chester is portrayed by Jacob Buster.

In Back To School, Chester is one of the students who missed the Hero League power assessment test and is forced to retake it. He demonstrates his Porcupine Powers to Max and Phoebe Thunderman.

Chester accidentally shoots Mr. Silver Eagle on the butt with his porcupine spines after Leonard intentionally knocked him to trigger the power. During the rest he is partnered with Rodney.

Jocelyn Chester has a crush on Jocelyn, but Jocelyn doesn't like him. He even tries to dedicate one of the superpower performances to Jocelyn but she refuses to acknowledge him.

Keely Keely likes Chester and she's worried that he will go to the dance with Jocelyn, but at the end Chester asks her out to the Hero Dance.

Porcupine Powers: He has porcupine powers as shown in Back To School. 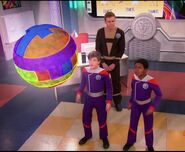 Chester and Jocelyn
Community content is available under CC-BY-SA unless otherwise noted.
Advertisement