Chloe Thunderman is a major character of The Thundermans. She made her first appearance on A Hero Is Born. She is the youngest child of Barb and Hank Thunderman. Chloe is portrayed by Maya Le Clark.

Chloe is the youngest sister of Phoebe, Max, Billy and Nora Thunderman. Like the rest of the Thundermans, Chloe has superpowers and hopes to become a superhero someday. Her superpower is Teleportation. When she was a baby, her power was Hydrokinesis.

Chloe Thunderman was born in A Hero Is Born after Barb got pregnant with her the same day. She had multiple growth spurts that day, growing from an infant to a baby who can walk. Her baby superpowers were bubbles which could be triggered by tickling her.

In Phoebe vs. Max: The Sequel, Chloe went through her final growth spurts to a 4-year-old. She said her first words, "I want pizza." In the same day, she gained her permanent superpower: teleportation.

It took some time for Nora and Billy (not Max and Phoebe cause they were used to it) to adjust to having a new younger sibling around. In Exit Stage Theft, Billy was sad that Nora was spending so much time with Chloe instead of him that she even forgot to find him in a game of hide and seek. In Patch Me If You Can, Nora almost hit Chloe with one of her trick shots. Scared of hurting her sister, Nora wanted to give up using her powers.

Her growth spurts made Oyster suspicious of her in Doppel-Gamers. He said Chloe was too big for a 6-month-old. Max and Cherry then distracted him from asking more questions.

In Robin Hood: Prince of Pheebs, Phoebe became jealous when Chloe said Max was her favorite. So, she told Chloe a story that made Max look bad. Chloe then teleported Max to The North Pole to freeze. Phoebe had to change the ending of the story to convince her to bring Max back. She then admitted Phoebe was her favorite too. At the very end, she also said Billy was her favorite helping Phoebe realize not to take the word too seriously.

In Aunt Misbehavin', Chloe ate her mother's birthday cake which Billy and Nora were supposed to be guarding. To get another cake from the same bakery, the celebrity diva wanted to humiliate Chloe by dumping cake on her face. This got Nora mad and defensive of Chloe. Nora smashed the cake on the diva's face.

In Stealing Home, she agrees to go with Nora, Billy and Barb on shoe-shopping. But when they go to Splatburger, the trio leave her alone while participating in a contest to get into the Splatburger commercial. She keeps ordering for more and more food even after her stomach being filled, leaving a big stack of food.

In Thundermans: Secret Revealed, Chloe's powers are taken by Max. When the powers are restored, she gets Hank's Flight and Super Strength. She flies away saying, "ThunderBaby, away!" Chloe comes back and saves everyone by dropping a heavy pillar on Dark Mayhem using Super Strength, just before he took Phoebe and Max's powers. Phoebe thanks her for saving their lives. The correct superpowers were later restored, giving Chloe her teleportation back.

In Thundermans: Banished!, Chloe wants to go to preschool in the SuperSuit. Later, when the Thundermans are banished, she is worried about leaving Hiddenville. She later teleports Phoebe and Max back to Hiddenville to stop the candy supervillain, Candi Falconman.

Chloe's preschool graduation party was held in Parks & T-Rex but Phoebe and Max missed it because of Z-Force training.

Chloe finally lets go of her baby blankie in Can't Hardly Date after realizing how awful it looks when she freaks out whenever she loses it. Before that, she would teleport everything out of the house until she finds.

In Side-Kicking and Screaming, Chloe has become a girl-scout and is selling scout cookies.

Chloe is a lot like any other little girl. She is sweet, adorable, helpful, and most of all super. She loves her siblings and has a great relationship with two of her older siblings, Nora, and Billy. She doesn't have such a great relationship with her two oldest siblings, Max and Phoebe. Despite her young age, she is far from being naive, and is more intelligent and mature than most of her family. 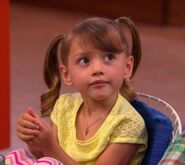 Chloe Thunderman in Are You Afraid of the Park 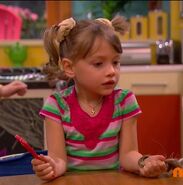 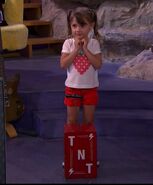