Eric Dean Seaton
Date of Emergency is the eighth episode of Season 4 of The Thundermans and the 79th episode overall.[1]

Phoebe feels left out in relationships since both Max and Cherry are in relationships. So, she creates a lie to fake romance but keeping it proves to be very difficult.[1] Meanwhile, Cousin Blobbin moves into the Thundermans’ house.

At Splatburger, Phoebe is finishing her homework just before Max and Allison join her. Max makes fun of Phoebe being a nerd which makes Allison wonder if Max has really stopped being evil. It is revealed that Max was on the cover of Evil Teen eleven times. Cherry and Oyster join them shortly afterwards, making an official announcement that they are now a couple. And their new couple name is "Choyster." Allison then says if Cherry and Oyster are Choyster, then she and Max can be "Mallison."

As Max and Allison and Cherry and Oyster prepare to double-date, the truth finally hits Phoebe: she's the only one in their group who isn't in a relationship, and she doesn't belong.

Back at home, while making balloon animals for Chloe, Phoebe decides to make her own balloon boyfriend. She starts talking to it. She tries to make out with it but Mallison and Choyster enter the house. Phoebe tries to assure them that she wasn't doing anything weird. Later, Choyster decides to take a selfie at the heart tree. After Mallison agrees to it as well, Choyster tells them about how Crazy Farmer Ted, the person who owns the farm where the heart tree is located, set a bunch of booby traps around the farm, and if he catches you, he'll feed you to his man-eating pig. Because Max could possibly get eaten and she gets to hang out with Choyster and Mallison, Phoebe tells them that she will be joining them as well. This makes them think that Phoebe has a new boyfriend who she is taking to the heart tree. Phoebe lies to them that she's got a boyfriend and that she and her boyfriend will be joining Mallison and Choyster for a triple date to the Tree-Heart at Farmer Ted's Farm.

Now more desperate than ever, Phoebe starts interviewing boys at Hiddenville High to go out on a fake date with her but they're either not good enough or scared of Farmer Ted. She then settles for the one boy who will do anything to date her - Gideon.

On the night of the date, the three couples meet at the Thundermans driveway and proceed to Farmer Ted's. Everyone is surprised that Phoebe would actually date Gideon. At the farm, Max helps the group navigate the booby traps set by Farmer Ted. Unfortunately, it turns out that Gideon is allergic to so many things. So, Phoebe is left behind to help him while the rest of the couples proceeds. It doesn't take long before Gideon triggers a booby trap and both him and Phoebe are tied up.

Max, Allison, Cherry and Oyster realize that Phoebe and Gideon have been left behind. To Allison's surprise, Max is actually concerned about Phoebe's safety. Max asks the rest of the group to go back and check in on her. They find Phoebe and Gideon tied up. Just before Max helps them out, he accidentally triggers another set of booby traps, capturing everyone.

While trapped together, Phoebe reveals that she doesn't really want to date Gideon. She just wanted someone desperate enough to fake date her so that she doesn't feel left out. Max, Cherry and Allison assure her that she's still very much part of the group and they will try to be more inclusive of her. Gideon then admits that he only accepted to date Phoebe as an attempt to get closer to her mother, Barb, which infuriates the Thunder Twins.

The infamous Farmer Ted arrive from the corn field, scaring the kids. It turns out he only set the traps in an attempt to get people to stay and talk to him since everyone is scared of him for no reason. He sets them free.

Mallison later take a selfie at the heart tree. Allison assures Max that she knows he isn't evil because he was concerned for Phoebe. However, the two get caught in a booby trap.

Cousin Blobbin arrives at the Thundermans house and reveals that he's lost his money and mansion. He had cashed in all of his money for a trillion dollar bill and put it in his wallet. But then lost the wallet. The Thundermans invite him to stay with them while he figures out what to do next. He invites his dog, Doggin to join him.

Living with Cousin Blobbin turns out to be a nightmare for everyone. He's an irresponsible house guest and he takes everything including TV, etc. The Thundermans plan to stand up to him but Dr. Colosso tells them that Cousin Blobbin is just giving them a rich-person test. That is, Blobbin lied about losing his money to see if the Thundermans would still love him even without his money. So, Colosso advises them to play nice with Blobbin so that he can reward them with a lot of money once they pass the test.

Billy and Nora get excited about the possibility of getting all that money. They work together with Chloe and their parents to impress Blobbin. However, the nicer they are to him, the more irresponsible and needy he becomes. This reaches to a point where they can't take it anymore and decide to tell Blobbin the truth. Blobbin reiterates that he really lost his money and is actually poor now. The Thundermans assure Cousin Blobbin that they still love him and are not interested in his money at all.

Doggin then vomits Cousin Blobbin's wallet. Cousin Blobbin takes the wallet and shows them his one trillion dollar bill. He refuses to give the Thundermans anything since they said they weren't interested in his money. He moves back to his mansion in Metroburg. 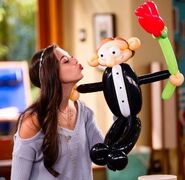 Phoebe & Gideon
Add a photo to this gallery

Retrieved from "https://thethundermans.fandom.com/wiki/Date_of_Emergency?oldid=57183"
Community content is available under CC-BY-SA unless otherwise noted.