Victor Gonzalez
Dinner Party is the third episode in Season 1 of The Thundermans.

Phoebe invites her crush over for a dinner party at her house. Phoebe wants to let Cole's family, let her hang out with Cole. Everyone except for Max dresses up fancy to be like Cole's family. The dinner party get's a little into a disaster.

Max gets out of the boys' bathroom and finds Phoebe and Cherry staring at Cole Campbell. Phoebe doesn't want Cherry to tell Max what they're doing but Cherry accidentally tells Max that they're waiting on Phoebe to build up courage to ask Cole out. Max starts making fun of Phoebe for having a schoolgirl crush and then he says that he would never have such a bad crush on a girl... but then he sees Tara passing by and he gets all tongue-tied. He tells Phoebe and Cherry it's different because Tara is his dark empress of the night who would stand by his side when he becomes a super-villain. Max then starts following Tara around, drooling all over her.

Cole comes over and makes Phoebe all nervous and go full motormouth. He asks Phoebe to go out with him for a frozen yogurt. He also tells Phoebe that his parents have this weird tradition where they have to meet all of his friend's parents. Phoebe, still nervous, accidentally arranges for a dinner with Cole's parents. When Phoebe gets more nervous, Cherry pulls her away. She pulls Max away from Tara too, telling the Thunder Twins that they will thank her later.

Back home, Phoebe excitedly tells her parents, Billy and Nora about how a boy asked her out. Hank says she's too young to be dating but Barb is excited that her daughter is dating. Phoebe reveals that she's invited Cole's parents for dinner tomorrow. Both Max and Hank rise against her because she would be breaking the no-supes-allowed-in-the-house rule and it would risk exposing their powers. Max says he doesn't want the rule to be lifted because then Phoebe would start bringing over her giggle buddies into the house. Max tells Phoebe that he doesn't want to bring his friends over either because then he won't have a chance to use his powers on Phoebe. Phoebe cries to Barb who then convinces Hank to let her have Cole's parents over.

Next day at school, Max stands by the lockers as he watches Tara steal lunch from a boy. She walks over to him and knocks him. She apologizes but Max says that he's a big fan of her work. He asks Tara to grab lunch with him. But Tara reveals that she's already stolen Max's lunch from his pocket.

Cherry stops Phoebe on the hallway for an emergency meeting after finding out online that Cole's parents are actually very rich. She tells Phoebe she should be very nervous because if the Thundermans don't impress the Campbell's then Cole won't be allowed to date Phoebe. Phoebe leaves early for home to prepare her parents to be fancy. She finds her parents embarrassing and explains to them that they need to impress Cole's parents. Meanwhile, Max and Dr. Colosso develop a plan to sabotage the dinner party so that Hank would keep the no-supes in the house rule. Colosso says that he is very proud of Max embracing being evil.

Dinner time arrives. Billy and Nora dress up as a butler and a chef respectively. Barb and Hank dress up in fancy clothes and put on fake accents to impress the Campbell. The Thunder Monitor announces that non-supes are approaching. Phoebe opens the door and Cole introduces his parents, Fiona and Gerald Campbell. Barb acts all fancy but then accidentally gets her tiara stuck on Fiona's hair. Way to make a first impression. Phoebe gets worried that this is going to be bad but Max is happy because he has plans to sabotage the party. To everyones's surprise, Cole's parents introduce Cole's older sister... Tara Campbell, Max's dark empress of the night. Max is shocked.

Max asks Tara what she would think if someone sabotaged the dinner. Tara says she would hangout with him but her parents won't let her... so it would be the dumbest thing anyone could ever do. Now Max must find a way to save the dinner! He pulls Phoebe aside and explains his evil plan to sabotage the dinner. First, he stops the beekeeper from releasing bees into the Thundermans house. Gerald Campbell asks Hank if the Thundermans are related to the Thunderman superhero but his wife says he's just joking. Hank looks nothing like Thunderman. When Billy and Nora come announce that dinner will be served in five minutes, the Campbells ask if the Thundermans have their children as their chefs but Barb and Hank claim that Billy and Nora are their "tiny servants." The Campbells are impressed and plan to get their own tiny servants.

Cole tells Phoebe that he didn't know her parents were this fancy. Neither did Phoebe. They start talking about embarrassing parents but Cole believes that the parents will let them hangout unless something goes horribly wrong. Just then, Max pulls Phoebe away and tells her that the dinner is about to go horribly wrong. The Thunder Twins agree to stop Max's plans. The next one is to stop Billy and Nora from serving the ice tea. Unfortunately, it's too late to stop them. After the parents drink the ice tea, they all start burping out loudly and embarrassingly.

The next prank involves releasing scorpions. Phoebe asks Billy and Max to stop round up the scorpions while she distracts the parents. Nora continues cooking, using Max's prank recipe which involves putting a whole gallon of hot sauce in the soup. Phoebe joins the table with parents and Cole and starts asking Cole questions to keep them distracted. However, it's difficult for her to keep her responses straight as she keeps getting distracted by the huge, gross and disgusting scorpions that Max and Billy are collecting.

When Cole's story ends, Nora is ready with her soup. To Max's worst fear, she confirms that she added the hot sauce into the soup. Max whispers to Phoebe about the soup. Phoebe quickly stands up and stops everyone from drinking the soup... because it's a smelling soup. Hank calls that nonsense. He drinks the soup but it turns out to be so hot that he spits it all out on Cole's mother. He drinks water to weaken it, but he ends up spitting more on Fiona. That's it, the Campbells declare and plan to leave.

Phoebe then comes out clean and explains that she asked the family to pretend they were fancy to impress the Campbells. They forgive her and agree to sit down and finish the dinner. But, they make it clear that Cole will not be allowed to hangout with that girl (Phoebe) because the Thundermans are a bunch of classless hooligans. Hank gets angry at the Campbells but Max calms him down. Max and Phoebe plan to get rid of the Campbells by unleashing their final prank - Nora's casserole - which has been set to explode. Max pulls Tara away from the dish and then asks the guests to go first. Cole's dad complains about self service and then puts his fork on the casserole - it explodes all over them. The Campbells leave the Thundermans house in disgust. Phoebe apologizes to Cole but Cole promises that he's going to continue seeing her regardless of what the parents think.

Hank then lifts the no-non-supes-in-the-house rule because even though the dinner was terrible, none of the kids used their superpowers in front of the guests. Max refuses to let the rule be lifted because it is worthless if he can't see his dark empress again. Right about then, Tara opens the door and asks Max to call her sometimes. Max happily changes his argument and supports lifting the rule.

The Thundermans can now invite non supes in the house as long as they don't use their super powers.

Billy and Nora as tiny servants 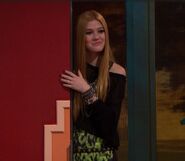