Dicky Murphy
Ditch Day is the fifth episode of The Thundermans.

Max and Phoebe use their powers at school on ditch day to make snowballs, and they both got into a snowball fight. Without them even knowing, a security camera's on the wall and records them using their powers. Meanwhile, Barb is sick and Hank's babysitting Nora and Billy, who are trying to get in on to Max and Phoebe's plans.

It's ditch day at Hiddenville High School. Phoebe wants to go to school in order to maintain her perfect attendance record. Max makes fun of her for being a nerd.

Phoebe goes to school alone and is later shocked when Max joins her in the class. Max tells her that he couldn't ditch school because he has already missed enough classes. If he missed more, he would get in trouble. The Thunder Twins sit in class alone for sometime before a teacher joins them. They ask the teacher to mark them as present and let them go but the teacher refuses because if they were to get an accident, she would be responsible.

The teacher makes it very difficult for Phoebe and Max when she starts showing them boring pictures of her pets. Max gets impatient and freezes her. Phoebe tells Max they shouldn't use their powers in public and it's wrong to freeze the teacher. She unfreezes her. But when the teacher starts going on and on about her pets, Phoebe freezes her this time.

Left alone in the school, Phoebe and Max start having fun with each other. Max runs outside and makes snowballs. Phoebe tries to stop him at first but when Max hits her with a snowball, she gets in the game as well. The twins run all over the school freezing water to make snowballs and throw at each other. After having fun all day at school, the Thunder Twins sit down in the hallway and have a heart-to-heart talk about how much fun they had together. Max tells Phoebe that she is okay to hang out with when she is not around her weird friends. Max and Phoebe go home and start hanging out together in Max's Lair.

Billy and Nora are surprised to see Max and Phoebe hanging out. They come over to Max's Lair to see what the twins were up to. While looking at the pictures that Max and Phoebe took together, Nora and Billy notice a camera in the background. This means the camera recorded everything Max and Phoebe did together and could expose their superpowers. Max and Phoebe come up with a plan to go to the school and erase the camera before anyone sees it the following day. Billy and Nora want to come along but the twins refuse, saying they don't need them. Since Barb is down with a really bad cold, Nora and Billy force Hank to watch a Space Kitties cartoon movie about cats in outer-space.

Max and Phoebe arrive at the school but find it already open for a cowboy-themed dance for older people. This makes it difficult for them to go to the principal's office without being noticed. Phoebe asks Max to dance with the teacher in charge in order to distract her and steal the keys to the principal's office. She takes over the microphone and starts telling people the moves to make. One of the moves involves throwing away the keys. Phoebe grabs the keys and run to the office. Only to find that they don't have the magnetic gadget they needed to erase the camera recordings. Instead, they find a message from Nora.

Phoebe realizes that Nora played them. She calls Nora to bring the gadget but Nora demands that Phoebe acknowledges that she needs her. Phoebe accepts. Nora yawns claims that she's going to bed, excusing herself from the move with Hank. Billy does the same. Hank is left alone watching the kitties movie. At first he hates it but then when there's a shocking revelation, he gets hooked on to the movie. When Barb calls him out to check on the kids, he pretends that he's walking to check on them. Then he goes back to the tv to continue watching the cartoon.

Nora and Billy run to school and find Phoebe in the principal's office. Meanwhile, Max is forced to continue dancing with the teacher to keep her distracted. When the teacher realizes that her keys are missing, she figures out that someone stole them to go to the principal's office. Max tries to stop her but he's too sore from the dance to do anything. The teacher comes too close to discovering what Max and Phoebe were up to. Luckily, the Thunder kids are able to erase the tape before their secret is exposed. 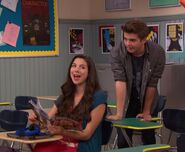 Phoebe and Max fun in class

Max and Phoebe playing with snowballs

Nora and Billy in Max's bed