Heat Vision is the ability to generate heat or fire from one's eyes. This superpower may also be referred to as Laser Eyes or Laser Vision on the Thundermans. It is similar to Heat Breath except heat breath is more of a wave/breath while heat vision usually has the form of sharp lasers. Nora's laser vision is orange and Dark Mayhem's laser vision is green.

Nora has developed a series of "trick shots" that she uses to zap something by aiming at something different than counting on reflection to reflect the lasers multiple times until they hit her target object. 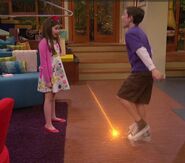 Nora cooks with her lasers