The Thundermans Wiki
Register
Don't have an account?
Sign In
Advertisement
in: Locations, Places, Organization,
and 2 more

Hero League is the organization that manages and monitors all superheroes in the Thundermans universe. The current head of the Hero League is Super President Kick-butt

The Hero League Headquarters is located in Metroburg.

Duties of The Hero League

The Strike Team is a special team of Hero League operatives used to track and take down dangerous criminals reported by superheroes. The Strike Team was first seen in Can't Spy Me Love when Phoebe used the Hero League's Find A Fiend app to track a cute boy.

The Z-Force is an elite group of some of the world's best superheroes, including superheroes whom other superheroes call when in trouble. In "Thundermans: Banished!", both Phoebe and Max were selected for a potential team spot on the Z-Force. It is the central storyline throughout Season 4 as the twins train to qualify for the spot. It is disbanded in "The Thunder Games" and replaced with "T-Force" led by the Thunder Twins. 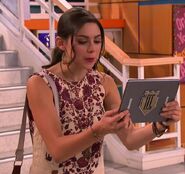 Phoebe and Cherry at the Hero League