The Thundermans Wiki
Register
Don't have an account?
Sign In
Advertisement
in: Characters, Female characters, McBooger,
and 3 more

In high school, Mandy and Barb were part of a struggling breakdance duo called "The Electric McBooger Babes."

One time she booked a gig but Barb bailed on her so that she could attend a friend's cape ceremony. Mandy was very disappointed that her own big sister didn't attend something she cared about. She refused to let it go and stopped talking to Barb. She later started running a globe shop in Metroburg without ever visiting the Thundermans.

Barb lied to her kids that she and Mandy are very close to convincing them that siblings should get along. When Max and Phoebe asked how come they never see Aunt Mandy, Barb used to say that Mandy is too busy saving the world. In 2016, the Thunder Twins tracked down Aunt Mandy as a surprise for Barb's birthday. It turned into a disaster when the McBooger sisters started fighting, destroying the Thundermans house.

With Max's help, Barb realized that she meant a lot to her sister and should have apologized for missing the gig. Mandy forgives Barb and they do an Electric McBooger Babes breakdance performance at the end. 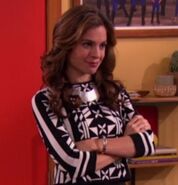