Max and Dr. Colosso both share Max's Lair as their bedroom. They do a lot of activities together including taking bubble baths and sliding. Dr. Colosso hates the rest of the Thundermans but loves Max. Sometimes their relationship can be seen as more of a frenemy, mainly because Dr. Colosso is a former supervillain and Max was going through an evil phase - and they both acknowledge that you can't trust anyone in the dark side. However, they deeply care about each other and they both hate the idea of being separated. In the last episode you can see he likes Max more than his own son, Balfour.

Phoebe vs. Max: The Sequel

Patch Me If You Can

He Got Game Night 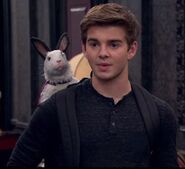 Max and Colosso at Villain League

Dr. Colosso and Max in Tux
Community content is available under CC-BY-SA unless otherwise noted.
Advertisement