Jonathan Judge
Report Card is the fourth episode in Season 1 of The Thundermans.

Max changes his grades on his report cards to make his parents very impressed. Because of that, Max gets into Phoebe's advanced math class. Max and Phoebe get in a math war at school. Meanwhile, Hank, Billy and Nora try to catch a newspaper thief.

Phoebe walks into Max's Lair to ask him to keep it down because she is trying to study for the "Math Bowl" but Max wants to make and launch Max 10 rocket to space. So, they start arguing about which is more important until Phoebe pushes a button, launching the rocket prematurely. Max gets upset because he wanted to push the button. Phoebe just makes fun of him and walks out.

Phoebe tells her parents about the Math Bowl she's preparing for but Max makes teases her being too obsessed with Math Bowl. She says that she wants to impress the Hero University. Max claims that he is better at math than Phoebe but neither Phoebe nor the parents believe him. After all, Phoebe is in an honors class and gets all A's unlike Max. Max says that he doesn't care because the Villain University doesn't look for good grades. However, Hank and Barb tell him they care about his grades... especially since tomorrow is the Report Card day at Hiddenville High. The parents threaten to take away his doomsday device if he doesn't get good grades. Good luck getting the grades up in a day!

The following day Max walks into the secretary's office but she is rude to him. He uses his powers to arrange the folders incorrectly and then challenges her alphabet skills. While the secretary puts back the folders in the correct order, Max gets to her computer and changes his grades to all A's.

Back at home, the Thunder Twins are both excited to present their report cards. Barb opens Phoebe's report card first. She got 5 A's but got a B in art class because she is very bad at art. Next, they open Max's report card only to be shocked that he got 6As. Phoebe is shocked but immediately suspects that Max changed his grades. Max's report envelope also includes a letter inviting him to join Phoebe's Honors Math class. When Barb and Hank rush to the refrigerator to replace Phoebe's photo with Max's, Max admits to Phoebe that he changed the grades but did it expect all that to happen. Phoebe tells him she worked too hard to get into that class and asks Max to transfer out. Max refuses to transfer out. Phoebe tells Max he can't handle the class because it's too challenging for him. But Max assures her that there is no Math equation out there he can't solve. The Thunder Twins trash-talk each other with math equations until Max eventually goes to his lair.

During the next Honors Math class, Phoebe does a math equation on the board while the rest of the students, led by Sarah, Evan and Tyler cheer her up. Sarah loves Phoebe's work and says that she hopes to be in her team. The math teacher arrives and announces Phoebe as one of the Math Bowl team captains. The other team captain is... Max Thunderman... who had begged the teacher to make him a team captain. Max brings everyone cotton candy and gets them cheering for him. Phoebe watches the scene so angrily from her desk, that she even breaks a pencil with her bare hands. She complains to Sarah about Max ruining everything for her. That's when Sarah learns that Max is Phoebe's brother. Unfortunately, she has already fallen for Max.

Phoebe confronts Max about ruining something she cares about. She explains that Max only joined the math bowl in order to mess with her and make her live a horrible life. Max gives Phoebe cotton candy which she admits is good after taking a bite. Max tells Phoebe that he just wants to crash her at the math bowl to prove that he's better than her at math. Sarah kicks Evan out of his chair to make room for Max next to her.

Later at home, the Thunder Monitor announces that "math nerds" are approaching. Phoebe opens the door and lets in Ashley and Tyler for Math Bowl study session. Ashley had agreed to fill in for Sarah after Sarah sent a message to Phoebe saying that she's down with a cold. They blame Tyler for spreading germs to Sarah because he's always sneezing. Max walks into the room and tells Phoebe that he also planned a study session. He then opens the door for Sarah and Evan. Phoebe is surprised to see Sarah in Max's team because she claimed she was sick. Sarah replies that she is lovesick. Max takes his team to his lair. They both freak out at seeing all the technology in Max's Lair. Dr. Colosso almost exposes the Thundermans when he talks out loudly. Max covers him up. Max then shows Sarah and Evan the Max 11 rocket. Sarah starts fantasizing about her kids with Max and how smart they will be.

Before the Math Bowl begins, Max and Phoebe exchange some harsh math-slams but Max runs out. The twins then make a deal: if Phoebe wins, Max will have to drop out of the class; and if Max wins, Phoebe will have to wear an ugly t-shirt with her googly-eyed face on it, saying "DUHHHH!" They Thunder-shake on the deal. The teacher takes over the microphone and introduces the two teams for Math Bowl XVII: Max's Trig Monkeys and Phoebe's Algebrats. The questions begin. Both Max and Phoebe's teams perform almost equally tying at 47 points each at first. To break the tie, Max starts using his telekinesis power to mess with Phoebe's team. He makes Ashley buzz the buzzer when she didn't mean to buzz the buzzer and therefore the question is transferred to Max's team. Phoebe realizes that Max is using her powers to control their movements. Phoebe indirectly complains to Max about using superpowers but no one else gets it besides Max. She starts playing dirty too by using her powers to make Max's team suck their thumbs. The teacher throws asks a new question instead but Max uses his powers to make Tyler mumble words without saying anything. The teacher gives them a break.

During the break, the Thunder Twins have a discussion about risking exposing their powers in public. Phoebe explains to Max how much she cares about the class. Max tells her that he only did it because Phoebe said he isn't as good as her. He tells Phoebe that he doesn't care about the class. He goes ahead to make fun of the nerds in the class and wonders why Phoebe cares about it so much. Phoebe tells Max that he has his lair and crazy inventions but all she has is school and clubs and friends. This is her lair and Max shouldn't take that away from her.

The break ends and the teams get back for more questions for the death row. The question can only answered by the team captains. The teacher asks a question about rockets that Max had explained to Sarah and Evan before. Max's team is confident that he knows the question. But when Max looks at his sister, he feels bad about ruining her chances. So, he answers "eleventy-seven" which the teacher rejects for not being a real number. Phoebe's Algebrats win the Math Bowl.

Afterwards, Phoebe thanks Max for getting the wrong answer on purpose just so Phoebe could win.

Hank discovers that someone has been stealing newspapers. Barb reminds him that he's retired from being a superhero but he says crime hasn't retired. She asks him to take Billy and Nora to school but he enslists them to become his secret sidekicks to help him catch the newspaper thief. Hank plans to catch the thief by placing the newspaper on a sticky ground so that whoever touches it, will get stuck. Nora challenges the plan but Hank shuts her down saying that the best sidekicks are the quiet ones. It doesn't take long before both Billy and Hank fall into their own trap and get themselves stuck on the glue. Nora sighs.

Hank then installs a tracking device on the track the newspaper thief. They later watch the record tape, only to find that the thief is in Hiddenville... in their block... in their house. They follow the map until it leads them to Max's lair. They realize that it was Dr. Colosso - Hank's former arch-nemesis - stealing the newspapers for reading and for going "number 2." They're disgusted. 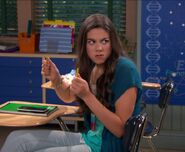 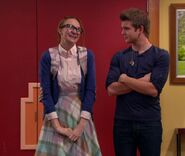 Phoebe and Max at Math Bowl