The Thundermans Wiki
Register
Don't have an account?
Sign In
Advertisement
in: Male, Superheroes, Guest characters,
and 3 more

Tech Rider is a guest character that is played by Carlos PenaVega in the Season 3 episode, No Country for Old Mentors.

He is a very enthusiastic person. He does have a big ego and finds himself in a good mood all of the time. According to Max, he's better than Thunder Man but the only reason was that he's way more cooler. He can be indifferent at most times; he needed Phoebe to stop a jailbreak even though he's a proper superhero.

Tech Rider is a tech-savvy superhero who resides in Metroburg. Tech Rider was on the list for the superhero mentor program. When Phoebe called Super President Kickbutt to change her previous mentor, Thunder Man, she changed to Tech Rider as a result of thinking he would be a better mentor.

At the bottom of a cliff, when he loses his supercycle, he goes back to Tech Walker and speedily pasts Max. 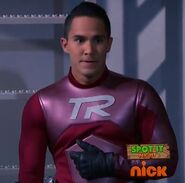 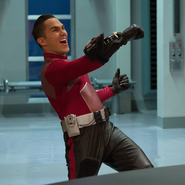