Robert Countryman
This Looks Like a Job For... is the sixth episode in Season 1 of The Thundermans.

Phoebe and Max are competing in the living room to see who loves Hank the most. They help cut his toenails, freeze-off his warts and even get a blanket, a pillow and a remote control for him. Hank excitedly tells Barb about how having kids is finally paying off but Barb tells him that they're probably just buttering him up for money. Both Max and Phoebe deny Barb's accusations. Hank tells them if they ever need anything they can always come to him.

However, when both twins ask for a new phone, Hank immediately shuts them down and asks them to never come to him again. Both Hank and Barb agree that the new MePhone is way too expensive and therefore if Max and Phoebe want it, they will have to work for it.

The following day, Max is making fun of Phoebe for dressing up like a nerd but when Phoebe reveals that she's going to Mrs. Wong's Pizza Palace for a job interview, Max quickly runs to the interview too. Phoebe follows him and they both arrive at Wong's at the same time. They find Mrs. Wong who turns out to be very mean. She also tells them that there is another kid, Tyler also interviewing.

Their interviews are not impressive at all but Mrs. Wong still hires Phoebe and Tyler. Right after being hired, Tyler sneezes really bad, which Mrs. Wong finds disgusting. She fires Tyler immediately and replaces him with Max. Back at home, the Thunder Twins tell their parents about getting the job but Barb is worried that they might not get along. Phoebe hopes Max will get fired. Barb's fear turns into reality when Max and Phoebe start their job at Wong's the following day. Mrs. Wong introduces them to the Wong-za 1000 pizza machine and explains how the process works. However, when she leaves the Thunder Twins mess up the pizza because they can't work together in harmony. Phoebe moves out some things so that she and her brother work from different stations. When Wong returns, she finds that they've blocked the door. Wong confronts them for not working in harmony. She also realizes that Max has been writing fake fortune cookie fortunes like "Some stuff will happen." She fires both Max and Phoebe.

After being fired, Phoebe and Max try to convince Wong to keep them because they've already been trained and it would take her long time to train new workers. Wong accepts and gets them back on condition that they have to work in harmony. Phoebe and Max are happy to get their job back. Phoebe and Max agree to work together, without using their powers. Phoebe even gets Max to bump it. After making the first successful pizza, they start singing in perfect harmony but the song ends up turning into an argument between the twins.

A customer calls Wong's ordering 150 pizzas. Phoebe says the order is too big, they should wait for Mrs. Wong but Max takes over the phone and says they will take the order. He explains to Phoebe that if they do all those pizzas, they will make all the money they need to buy their new phones in one day. Max lies to the customer that he is the manager and he even asks the customer to pay Pizza Artist Fee of $400. Max offers to have all the pizzas ready for the customer in 30 minutes. Phoebe is worried they won't be able to deliver and hence they could get fired. Max tells Phoebe that they can do it because they're Team Thundermans. He tells Phoebe to "bump it" which leaves Phoebe with no choice since it's a Thunder Twin thing.

The Thunder Twins turn up the Wong-za pizza machine to speed up the process but the pizzas start moving too fast for them to handle. They try stopping the machine but it fails. Phoebe uses telekinesis to block pizza from flowing out of the machine. This turns out to be a temporary solution because it causes the machine to start building up pressure, ready to explode. When the twins realize that the machine is about to blow, they run outside. Mrs. Wong walks in right before the machine explodes. The machines spits out pizza all over the kitchen and covers Mrs. Wong with pizza dough.

Covered in pizza dough, Mrs. Wong calls out for Phoebe and Max and fires them for good this time.

Meanwhile, Billy and Nora are playing sports-stacking game outside in order to participate in a tournament and earn money. This was supposed to be a secret between Nora and Billy but Billy accidentally reveals their plan. Barb takes the cups back inside and starts stacking. Hank finds Billy and Nora's tournament card and he gives it to Barb so that she can participate in the contest. Billy and Nora follow their mom to the tournament to cheer her up but instead they start earning money from other people by betting on the winner. Barb gets scared by a little girl named Avery who was last year's champion. When Barb and Avery make it to the finals, Barb gets even more worried. Hank encourages her by reminding her that she is a superhero who has taken out many big villains and therefore he should think of Avery as a smaller version of the villains. Barb agrees to take Avery down after she calls Barb "grandma!" Nora bets against Barb in the finals. Barb loses to Avery and therefore Billy and Nora earn money from the bets. They use the money to buy new MePhones.

Back at home, Phoebe and Max reflect on how they got fired twice in one day and how they make a great team... just before Billy and Nora walk in talking on their new MePhones. Max and Phoebe ask how the kids got new phones. Nora explains how they bet against their mom in the stacking contest. Since gambling is wrong, Phoebe and Max blackmail Billy and Nora to give them the new phones or they will tell their parents. So, they take away the phones for themselves. But Nora gets angry and melts the phones instantly with her laser powers, stating f she can't have them, nobody else can. Billy and Nora then go monkey shopping as Max and Phoebe desperately try to revive the phones as the episode ends. 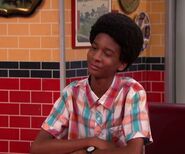 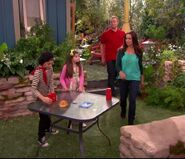 Nora and Billy bet against Barb

Want to check out more This Looks Like a Job For... pictures? Visit the gallery now!

This Looks Like a Job For... Gallery
Community content is available under CC-BY-SA unless otherwise noted.
Advertisement