The Z-Force is an elite team of superheroes on The Thundermans. It is run by the Hero League, and comprises of the best superheroes in the league. These superheroes are called when other superheroes require help. The chances of joining the Z-Force are very low and getting into it is a big honor.

The Z-Force usually communicates to superheroes by projecting a hologram of its logo, as seen in Thundermans: Banished! and Z's All That.

Due to abuse of power, Z-Force is disbanded by Super President Kickbutt in The Thunder Games and replaced with a new team led by Phoebe and Max Thunderman. The new team is renamed, T-Force.

In Thundermans: Banished!, there is a new slot opening in the Z-Force for the first time in 9 years. The Z-Force sent out invitations to some of the best superheroes for a chance to fill the slot. Phoebe Thunderman is chosen as one of the finalists for defeating one of the most powerful villains, Dark Mayhem in Thundermans: Secret Revealed. They said would observe her over the coming months to determine if she's qualified for the slot.

Phoebe got so excited for being nominated to fill the spot that she didn't want to continue training Max anymore because she was afraid he would make a rookie mistake under her watch. So, Max made a fake Z-Force communication beam, saying that he is chosen for the same slot too. This increased competition among the Thunder Twins, leading to the destruction of Splatburger. Phoebe later figures out that Max programmed his watch to project the Z-Force hologram. President Kickbutt withdraws the twins' names for consideration for messing up and the Thundermans are banished from Hiddenville.

However, after Max and Phoebe risked losing everything, including their powers, to save Hiddenville from Candi Falconman, the Z-Force announces both Phoebe and Max Thunderman as finalists again to join the potential open slot, as a team.

The plot of this episode revolves around Phoebe and Max's Z-Force training. Max and Phoebe have been given money for Z-Force training equipment but Max uses the money to build a team headquarters for him and Phoebe. A Z-Force poster is also seen in Max's Lair.

The twins are submitting their special skills to the Z-Force. Phoebe has already submitted all of her skills. Max wants to enter gadgets development as his special skill and so he creates the Crimecaster which can predict future crimes. After doubting his skills, it turns out that the gadget actually works and therefore Phoebe agrees to enter Max's gadget development skills for the Z-Force application.

Orange is the New Max

According to President Kickbutt, the Z-Force is fighting a giant, radioactive worm in the center of the Earth.

May Z-Force Be With You

Z-Force sends a representative to interview Phoebe and Max as part of the Z-Force recruitment process. Unfortunately, Phoebe has injured her neck and legs while trying to help Cherry. So, the Thunder Twins enlist Cherry to pretend to be Phoebe for the interview. They dress Cherry in Phoebe's Thunder Suit, and teach her all the questions they expect to be asked by the Z-Force. D-Tail arrives and is easily fooled into believing that Cherry is Phoebe. He keeps complaining about how he didn't make it into the Z-Force. He later takes the "twins" on a mission, hoping to make a name for himself in the Z-Force. While Cherry distracted D-Tail by having him take a selfie of stopping the reactors, the real Phoebe helps to get them back to stable conditions. Max and Phoebe pass the Z-Force interview, advancing to the next stage.

Max and Phoebe get a special TV interview by Anderson Super, a popular Metroburg TV host, on their Z-Force progress. After learning about the upcoming Supe Awards, Max is concerned that a stink bomb he set as a prank back when he was evil could jeopardize their chances of getting into Z-Force. Both Phoebe and him are so concerned about losing their opportunity in joining the Z-Force that Phoebe ends up absorbing Dark Mayhem's powers from the power-sapping orb in order to be able to stop it. She successfully stops the stink bomb and secures the chance at the Z-Force. Unfortunately, the powers turn her evil.

Z-Force updates its rankings and unfortunately, Max and Phoebe are at the bottom of the list. They realize that it's because they're the only ones who didn't submit the "Lil Z Mentor Program" bonus assignment. The Lil Z Mentor Program is a special program where Z-Force hopefuls have to submit a video of themselves training a young superhero to take their powers to the next level. The Thunder Twins had missed the bonus assignment because when the Z-Force hologram announcement the assignment, Dr. Colosso was the only one at home and he refused to tell the twins. To complete the assignment, Phoebe and Max select Nora as their Lil Z. However, after seeing Billy's armnadoes skills, they secretly choose him over Nora. After learning what happened, Nora confronts the twins leading to a mega-disaster. Nora and Billy rescue the Phoebe and Max, after which the twins decide to work with both Billy and Nora as their Lil Zs.

The Z-Force sent a holographic letter to all the Z-Force hopefuls that the day after is the Z-Force Championships and Commander Dirk Trumbo advises them that they get the day off since its the day before the championships.

Commander Dirk Trumbo starts their first test which is they have to find a way to escape the gas in the room. Galexia steals the Phoebe and Max's idea and they manage to get out of the room.

Amazium lost his chance of getting in the Z-Force when he kicks a plate of egg rolls mistakenly thinking it was another test. The next test is the Power Derby. The rules are that you would have to force the opponent out of the ring with their superpowers. Whoever is out of the ring loses and don't go to the next test. The Thunder Twins, Galexia, The Gamer and Fantasto-Man made it past the test and Shield Girl, Sonic Boom, The Hipster Twins, Chronic Heat and Night Light don't. When Galexia fist-bumped Fantasto-Man, he went flying which means he was out. As a reward, the candidates get sent home.

Even though the Thunder Twins won, Commander Dirk Trumbo was going to flip a coin because the Z-Force doesn't need two supes with the same power and because they don't have a "twin power". Phoebe suggests by accident that they should fight each other and whoever wins is on the Z-Force. Commander Dirk Trumbo takes her idea and Phoebe and Max fight one another. Phoebe could have won but she let her brother win instead. Max is officially accepted into the Z-Force.

The Z-Force gets their first mission where the Flame Brothers escaped from jail even though Max wants to go save his family. After Max went to Hiddenville to save his family and after they defeated Balfour, Super President Kickbutt arrived to tell the twins that the Commander is no longer the head of the Z-Force. Super President Kickbutt made the Thunder Twins the head of the Z-Force. Phoebe and Max recruited the rest of the Thunderman Family to be on the Z-Force since they were allowed to choose who they want on the team. Also, the Thunder Twins change the title Z-Force to T-Force, the t stands for Thundermans. The T-Force get their first mission where they have to stop a villain named the Brain Puncher.

The Z-Force was giving a new slot in 9 years. However, the Thunder Twins chose the Thunderman Family as part of their Z-Force organization. Below, are the candidates of who had the chance of being in the Z-Force.

Did not qualify for the Z-Force Championships

Qualified for the Z-Force Championships but eliminated before Round 1

Eliminated in Round 1 (Power Derby)

Eliminated after Round 1 but before Round 2

Eliminated in the Max and Phoebe Mano a Mano Face-off 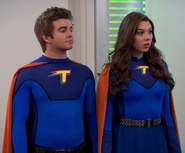 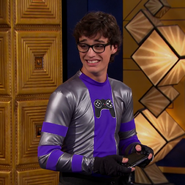 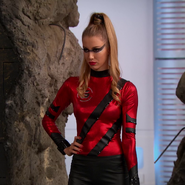 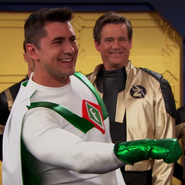 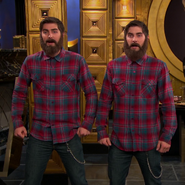 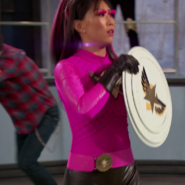 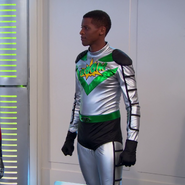 D-Tail arriving at The Thundermans' Home